Breasts are attractive to most of us. And why wouldn’t they be? They’re beautiful, soft, warm and alluring organs responsive to touch. But aren’t they just a lump of fat?

Evolution has ushered the attraction towards breasts. But when does this attraction cross the line? Why are breasts being so overtly sexualized? Why are they objectified? Why is it considered unethical to breastfeed in public when breasts are meant for it?

Before answering these questions it is essential to know why breasts exist and the science and history behind them.

Female breasts play a role in sexual stimulation and reproduction. They are secondary sexual characteristics i.e., they appear during puberty or sexual maturity, just like the growth of facial hair of men.

Female nipples have numerous nerve endings and release oxytocin when subjected to touch. Hence nipples are an important erogenous site. Male nipples can also play a part in sexual stimulation. One study found that nipple stimulation enhanced sexual arousal in 52 per cent of men. But then why don’t males develop breasts like females?

This is because after fertilization, when an embryo is formed, the foetus starts developing and due to the presence of X-chromosome, the foetus develops the primitive structures involving milk ducts. Another way of putting it is that the foetus remains gender-neutral.

But then the sex-determining Y-chromosome is activated around the seventh week of foetal development. As the sexual reproductive parts start developing in males, it doesn’t undergo changes that would eventually lead to the development of breasts. But women don’t have Y-chromosomes, so their duct development flourishes and their breasts develop during puberty.

During puberty, the female breasts develop milk ducts and milk glands that produce nourishment for an infant in the form of milk by lactating after the pregnancy.

Breasts weren’t always such a matter of concern like they are today. Exposed breasts were quite the norm for many indigenous societies. Toplessness was common in parts of India, Thailand, Indonesia, most regions of Africa and in pre-Islamic cultures in the Middle East. In countries like Laos, virgin women used to be fully clothed whereas married women with kids exposed their breasts in public because baring the breasts for breastfeeding was considered to be nonsexual. Covering of breasts was considered a privilege, and only women of higher social and economic statuses covered their breasts.

With the rise in western culture, the idea that covering up of nipples and areola(a small circular area, in particular, the ring of pigmented skin surrounding a nipple) is a sign of modesty became popular. And being topless in public was considered as an act of indecency.

Throughout history, female breasts have been featured in art and visual media in the forms of sculptures, paintings,  photography, etc. But in the more recent years, due to social norms and female modesty often enforced by statutes, require women to cover their breasts in public. Toplessness is also acceptable in certain private beaches and resorts.

Understanding that breasts are actually gender-neutral apart from the varying amount of tissue and knowing that they were accepted in various cultures in the past, then what has caused them to be sexualized?

Most societies have been deeply rooted in patriarchy. The notion that men are superior is pushed into the minds of people from infancy. Women are treated as inferiors which leads to discrimination, objectification, and disregard of their opinions, views or consent.

Patriarchy leads to the sheer disregard of the fact that female breasts are not sexual but are for breastfeeding, though they are erogenous, it doesn’t imply that they should be sexualized.

Breasts have been used for advertising everywhere, on newspapers, billboards or television. Businesses have used breasts for the most unrelated products or services. Breasts have become a sexualized commodity for companies worldwide. It has also been observed that advertisements reinforce gender stereotypes which is degrading and ultimately leads to objectification of women.

Women and girls wearing revealing dresses are undignified. Young girls, even before they develop breasts, are taught to cover up their breasts and ones not doing so are shamed. The fact that breasts are something women need to hide leads to their objectification and sexualization.

Both male and female bodies are often sexualised. But both have two vastly varying blowouts. For example, male abs are viewed as sexualised, yet strong, dominant, and desirable. On the other hand, female breasts are viewed as sexualised, yet objectified and shameful. Visuals of bare breasts are craved, without thinking of the person to whom they belong. Men relate to breasts like a kid longing to open a present because they are like some forbidden entities. This results in behaviours such as catcalling, groping, stalking, flashing, molesting, locker-room or lewd talk about women and other forms of harassment in men and young boys. On the contrary, women are instilled with insecurity and shame for just having breasts.

Self-sexualization refers to intentionally engaging in activities explicitly to appear sexually appealing. Self-sexualization is a choice. The woman is in control of her own narrative, and it is a way of expressing herself. Some women find it empowering. So then isn’t self-sexualization a double standard? No! It is a valid right of a woman to be seen the way she wants.

So then if it’s okay for women to sexualise themselves, why isn’t it okay for others to do so? Well, others sexualizing women is degrading and dehumanising. It leads to commodification of breasts without regard to the dignity of the women carrying them. In the big picture, it contributes to harmful gender stereotypes that normalise violence against women and young girls.

Social media plays a major role in one’s life and may impact the construction of one’s identity, gender or sexuality. Boys and girls from a young age get impacted by it. It may create a false image of body size, features, luxury life, etc, which creates exorbitant expectations and doubts regarding one’s own self. These lead to long lasting impacts on an individual especially on girls.

Females are often slutshamed for wearing revealing dresses or posting content not acceptable to others. Slutshaming actually encourages the culture of demeaning women and treating them subpar to men, incapable of making their own choices. Studies have found that this leads to a severe effect on the mental health of these women and girls. 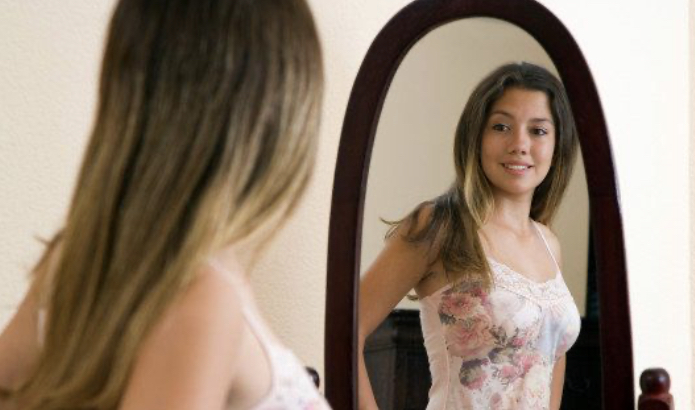 Beauty standards are set for women and they are objectified and commoditized on various pages on social media. Instead of showing women as individuals, they are shown as sexual objects which may lead to sexualization of breasts.

Social media sites also censor female nipples. The nipple is something that both genders have but only females need to hide. But the shape and size or the bust is acceptable. The cleavage, the underboob, and the skimpy tight clothing are all acceptable,which makes no sense. This censorship actually leads to wrongful representation of breasts as sexual organs.

Breastfeeding is the primary function of breasts and the natural means by which a baby receives nourishment. Still it has various social stigmas surrounding it in many societies.

A breastfeeding mother often needs to feed her child, even at times in public whether she’s running errands, at her job or out in a restaurant. Many people disdain those mothers who breastfeed in public, calling her an exhibisionist and indecent or immodest. But she’s just feeding her child! Women shouldn’t have to be discreet and hide in walls every time they have to feed their child. It sets a woman back, wastes her time, puts shame upon them just to nourish their child. Breastfeeding is NOT sexual. Scientifically proven fact says that ‘breast is best’, but apparently, not in public. And so women are still being asked to cover up.

Many countries around the world understand that, and laws have been formed that give women the right to breastfeed in public. But legality does not suddenly change the instilled mindsets of people and breastfeeding in public continues to be frowned upon by many people.

Free The Nipple is a movement which fights laws against prohibiting female toplessness, public breastfeeding, and social media bans on female nipple exposure started by filmmaker Lina Esco. The campaign argues that it not only be legally, but also culturally approved. It is aimed at giving women the option to be unapologetically shirtless or braless, free of harassment and judgement.

Femen is an activist group based on protecting women’s rights who also advocate this movement. Many inspiring public figures have also expressed their support for the movement on social media. 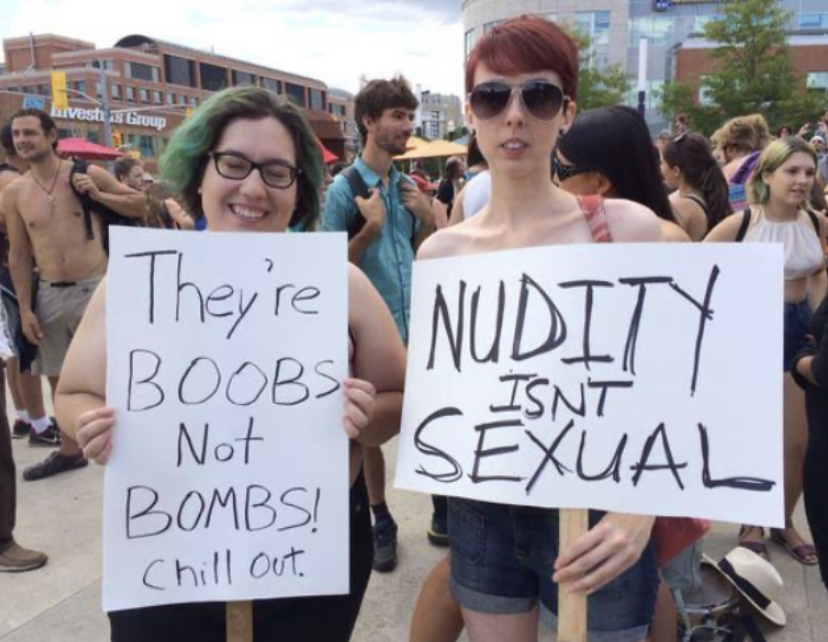 The campaigners argue that breasts are secondary sexual organs, and not “genitals” or “private parts”. And so it should not be considered nudity. The campaign points out that not being able to bare the nipples in public specifically for women is a form of gender discrimination. And thus feminism is embedded into this movement. Toplessness serves this campaign not only a platform, but also as a protest and consciousness-raising tactic to de-sexualise breasts.

Sexualizing breasts has a negative impact on women and young girls. Breasts need to be treated like just another attractive feature without associating it with obscenity and shame. Sexualization and objectification of breasts is also associated with rape culture.

Spreading awareness and supporting the motion doesn’t mean all women should stroll about topless in public. At the same time, a woman supporting the cause yet not willing to be bare chested or breastfeed in public doesn’t make her a hypocrite. It is about giving women their own discretion.

Society must accept that breasts are not sexual organs. This must be done by giving proper education early in life, creating awareness, destigmatizing breastfeeding in public, etc. A woman not wearing a bra, showing her nipples, breastfeeding, etc should be normalized and this change won’t come instantly. Many social norms have been deeply ingrained in our society and these need to be tackled from their roots. The more privileged need to show their support. Men shouldn’t be silent spectators in all this. They must raise their voices along with the women and bring about the change.